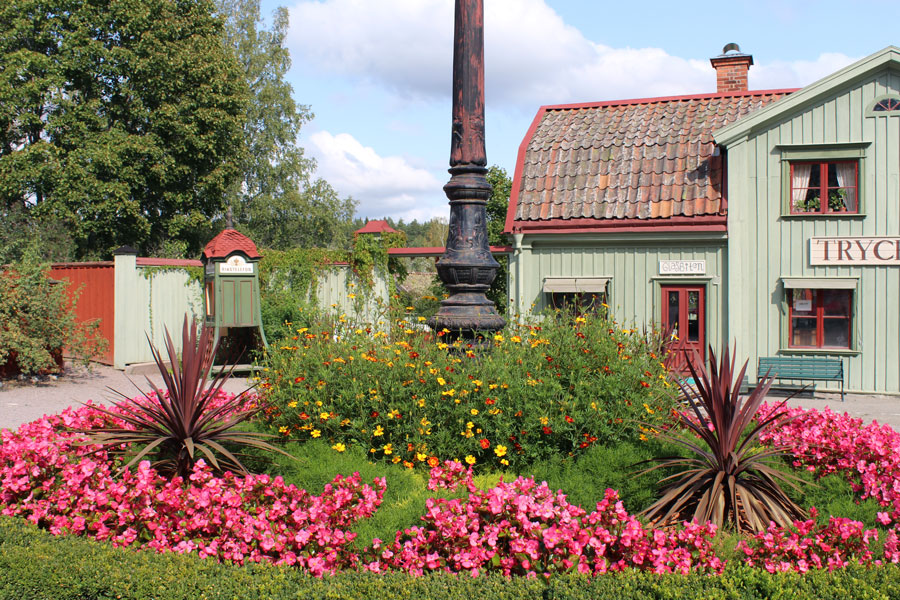 In The Museum’s City Quarter, visitors come first to the Town Square, the centre of the community. Circling the Square were shops that sold goods, and Market Days were held regularly.

Poor people often lived in cottages similar to the little red cottage on the Town Square. This cottage comes from Djäknegatan (‘Student’ Street) on Kyrkbacken (Church Hill) in Västerås.

Facing the cottage is a large building, which is now a restaurant. At the end of the 1800s, the building was the residence of bank director Rudolf Gagge and was situated in Fiskartorget (Fish Square) in Västerås.

The two-level, plank building in the Town Square, Tenngjutaregården, was the residence of a wealthy family. The building’s upper level shows how several rooms of such a residence looked at the turn of the century. The house was previously situated in Kopparbergsvägen (Copper Hill Street) in Västerås. The house had a garden surrounded by a white plank fence. The design of the fence, the planks and other items in the garden are based on turn of the century originals from throughout Västmanland County.

The telephone box dates from the beginning of the 1900s.

A pump house from Hamngatan (Harbour Street) in Västerås can also been seen on the Square. City residents fetched their drinking water from the pump house.

A storage loft from Skultuna is situated next to the restaurant. The lower level once housed a social hall that could be used by everyone in the village. The row of storerooms from Hemmingsbo in Fläckebo Parish was the first building erected at The Museum. It originally belonged to an inn. 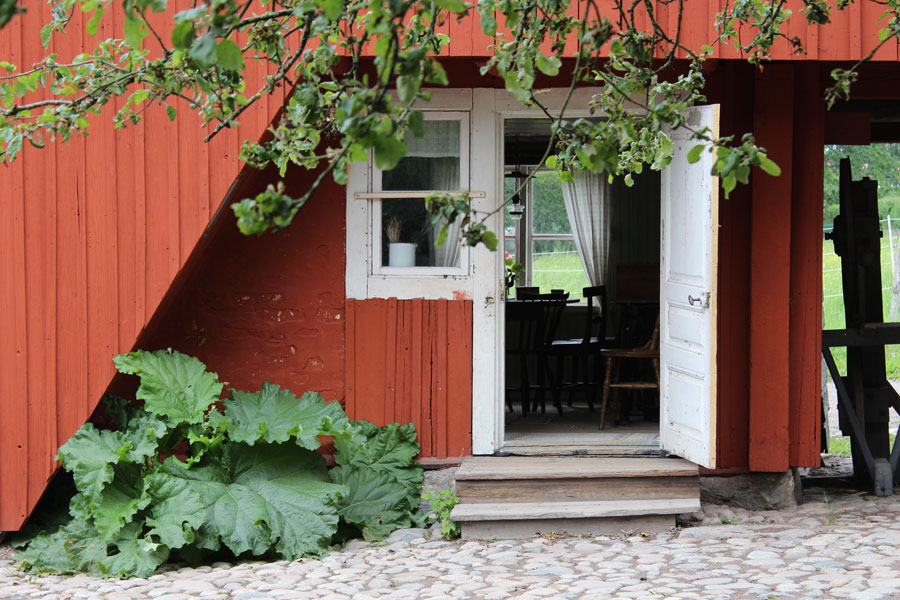 Behind the Town Square is the Worker’s Yard. It is divided by an outbuilding and an outhouse, which was shared by families whose homes surrounded the yard. There is a little garden-patch where rhubarb and potatoes could be grown.

A one-room flat with a kitchen has been furnished as it would have been for a turn of the century worker’s family. The room was usually closed off and unheated, and the family ate, slept and worked in the kitchen.

The building is called Skarprättargården (Executioner’s Residence) because it was once the home of the county executioner. It was situated in Gamla Bryggerigatan (Old Brewery Street) in Västerås.

The building next door was also used as a residence and storage shed, and has an addition that contains a pig sty with an outhouse over it. This building comes from Återvändsgränd (Turnaround Alley) in Västerås.

On the short side of the yard is a carriage house. On the corresponding side is a building that dates from the 1600s. It housed small shops that sold goods directly to people on the street. The building comes from Smedjegatan (Smith Street) in Arboga.

The City Quarter also contains two buildings from a merchant’s residence that encompassed an entire block between Stora gatan (High Street) and Munkgatan (Monk Street) in Västerås. Approximately ten buildings, which surrounded a little square, comprised the original residence. One of the buildings functioned as a small pub.

Västerås was an important commercial centre. Copper and iron were shipped from mining districts in the north to Västerås for transport by water to Stockholm.

Västerås was a city characterised by church, castle and railroad. The bishop and the county governor were situated in Västerås, along with one or two mayors who served as heads of the city.

Merchants and ship captains handled the goods trade. Merchants were responsible for insuring that iron was transported from mining districts to Stockholm. Various craftspeople such shoemakers, saddle makers, smiths, hat makers and linen weavers could also be found in the city.

In the mid-1800s, the City changed. Several factories were built. The city’s first big industry was Westerås Mekaniska Werkstad (Västerås Mechanical Works) founded in 1874. Several palatial schools, a new hospital, a new city hall, stores and banks were also constructed at this time.